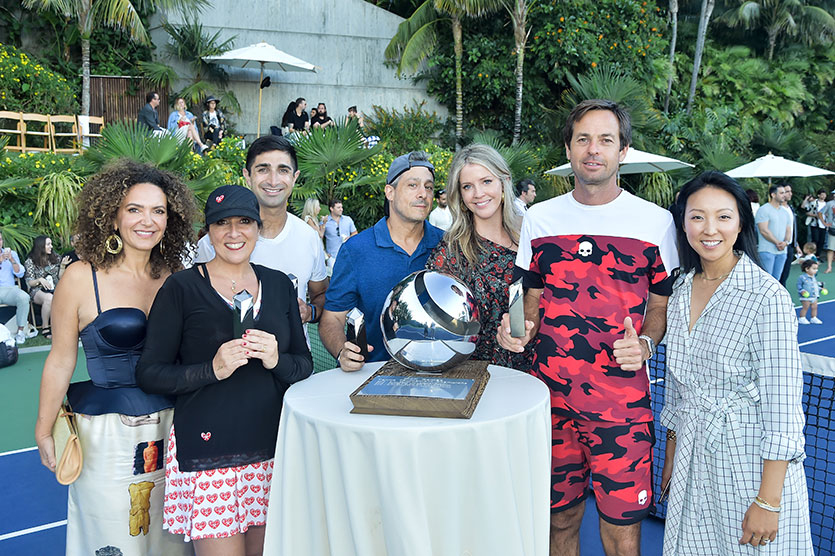 The annual celebrity tennis tournament is the biggest annual benefit for the MAK Center for Art and Architecture.

“We have this amazing cross-section between art, design, and fashion,” MAK Center director Priscilla Fraser says while greeting people at L.A.’s Sheats-Goldstein Residence. Across the lawn, the MAK Games tennis tournament is buzzing with fans of design, tennis, and the sweeping views of Los Angeles the house so uniquely offers. “Everybody is here to see each other, but it’s fun to have this additional element.”

One of the city’s most spectacular courts, with its commanding view stretching from the Hollywood Hills out to the Pacific Ocean, the John Lautner–designed Sheats-Goldstein Residence makes for a destination-worthy setting for the MAK Games. Players in the eight-game set of final matches come from all walks of the arts community in the city. Ahead of the tournament’s final square-off, a celebrity exposition match featured actor Alex Karpovsky and Maroon 5 guitarist James Valentine. The final game, and the rightfully design-forward trophies, were won by Ikon Art gallery owner Greg Abramson and his partner, tennis instructor Heinz Haas.

Fraser first began the fund-raiser to support the MAK Center’s work at the Rudolph Schindler House on Kings Road, along with other Schindler-designed sites in the city. The idea for the tennis tournament was launched in 2013.

“The first few years, we were trying to figure things out and see how the puzzle pieces fit,” explains Esther Kim Varet, the owner of Various Small Fires gallery, who cofounded the MAK Games with Fraser. Varet cochaired this year’s tournament with AD100 designer Pamela Shamshiri. “Now, it’s established itself as a check-in every summer for people in the art and architecture communities here.”

A sold-out crowd of over 400 guests mingled around the property and, in small groups, toured the iconic 1960s home. The house—eminently recognizable for its appearances in films and TV shows like The Big Lebowski, Charlie’s Angels, and Southland—will be donated to LACMA, owner James Goldstein announced in 2016. The grounds were filled with notable names in the design industry, like The Future Perfect founder David Alhadeff, lighting designer Lindsey Adelman, and many others, who naturally couldn’t turn down the chance to hang out and mingle on the grounds of the property.

The MAK Games is the MAK Center for Art and Architecture’s primary benefit to help sustain the extensive, free programming. “This is our moment to have fun and reach out to our community,” Fraser says, noting that the party’s tickets sold in record time and garnered increased support from sponsors. The event also featured tennis-themed cakes, food, and drinks, along with a live musical performance on the court after the tournament.