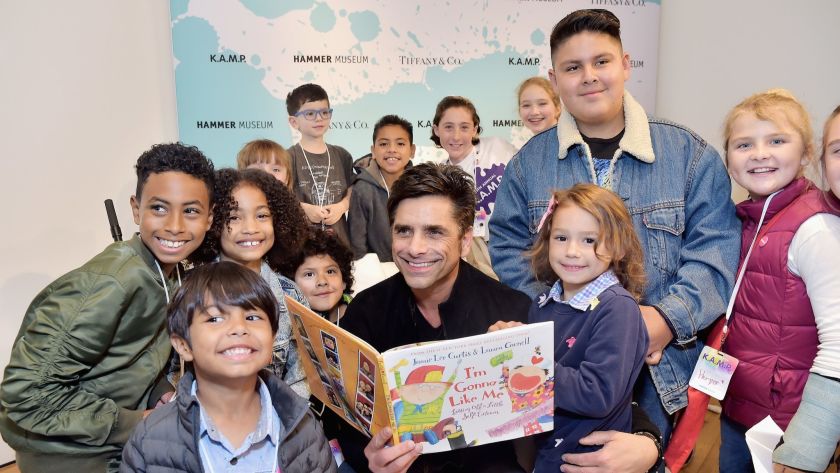 For Sunday’s Kids’ Art Museum Project — better known as K.A.M.P. — at the Hammer Museum in Westwood, actress and storybook reader Sofia Vergara chose “Dragons Love Tacos” by Adam Rubin to share with the gathering of children.

“I thought it was appropriate for the day of the [“Game of Thrones”] finale,” said the “Modern Family” star,speaking of the dragon-fueled TV juggernaut, before adding another reason: “Tacos are Latin food.”

Standing beside her, husband Joe Manganiello said he planned to read from his own copy of “Sir Toby Jingle’s Beastly Journey” by Wallace Tripp, his favorite book as a child.

“This is the actual copy I had as a kid,” he said, pointing to his name, written as a 4- or 5-year-old on the inside cover. “It was in a box, and it just came along with me from move to move. So I dug it up for this.”

“I love kids,” said the “Magic Mike” actor, adding that he’d had books shipped to the Children’s Hospital in Pittsburgh, where he’s from, and started a club for “the children stuck there.”

The 10th K.A.M.P. offered children an opportunity to create paintings, sculptures, collages and other art projects conceived by working artists. In between art workshops, children could duck into a storybook corner where Vergara, Manganiello, John Stamos, Elizabeth Chambers and Ki Hong Lee read to them.

For his turn as a reader, Lee of “The Maze Runner” said he chose “Juno Valentine and the Magical Shoes” by Eva Chen because “it’s about some pretty historic female figures, and it’s important for girls to be empowered and see themselves represented in books.”

After slipping past masses of streamers and containers of balloons, guests of all ages entered the museum, where they encountered table after table of artistic possibilities.

Buckets of popcorn, bowls of trail mix and a machine spinning cotton candy awaited guests, as did sandwiches, wraps and salads. And despite the light drizzle on Sunday, some children remained outside to sit and spin in roll-around chairs by British designer Thomas Heatherwick.

Here’s what a few of the artists had to say.

At her “Funhouse Portrait” table, where children made self-portraits according to how they looked in curving mylar mirrors, Bonnet said, “As my work deals with distortions, I thought that having this different view of themselves could be interesting.”

Nikolai Haas said he and twin brother Simon were available to help the children make clay sculptures, “but the cool thing about kids is that they’re often more creative than adults. I think I learn more than they do just by watching them.”

At his “Foot Cast Assemblage” table, Jackson said children could make and decorate molds of their feet. “Children are better at attaching things than we are,” he said, recalling an assistant who spent five minutes thinking before doing anything. “Kids just do it.”

Giving children a chance to make textured painting with cereal, salt, shaving cream, glue and flour, Shilling said, “The idea is to make paintings with whatever you have at home. You can mix things up and feel like a real scientist.”

“Here, children learn how to be creative with all kinds of materials,” said event co-chair McHale. “It makes them see museums differently because they can be involved in a hands-on way and interact with artists whose work you can view in the museum.”

“By exposing them to the work of artists,” said co-chair Kanter, “they’re given the opportunity to go on to creative careers. These kids are the future of supporting arts education and arts institutions.”

From the L.A. Times